How Folkestone Rotary Club pioneered a way for charities to work together and help those struggling with unmanageable debt.

In 2012, when this story began, one in four of all UK households had more debt than their total money and assets put together1. As a result, many of those in the lowest income bracket suffered from hopelessness and a welter of personal problems from poor mental health to homelessness, addiction, and poor diet2. Folkestone had more than its share of these issues. More than half the districts in Eastern Folkestone were amongst the top 20% of most deprived areas in the country3.

In that same year, it was also Folkestone Rotary Club’s turn to host the annual weekend get-together of the four Clubs making up the "Quadrangulaire": Cologne, Folkestone, Liège, and Lille. Traditionally, the host Club undertakes an international development project on behalf of the Quadrangulaire, drawing on grants from Rotary International and elsewhere. On a visit to the war rooms at Dover Castle (possibly not the most diplomatic choice of venue), members of the Cologne Club suggested to Folkestone’s President, Frank Sturrock, that perhaps Cologne could use their leadership in 2015 to tackle the deprivation in Eastern Folkestone. 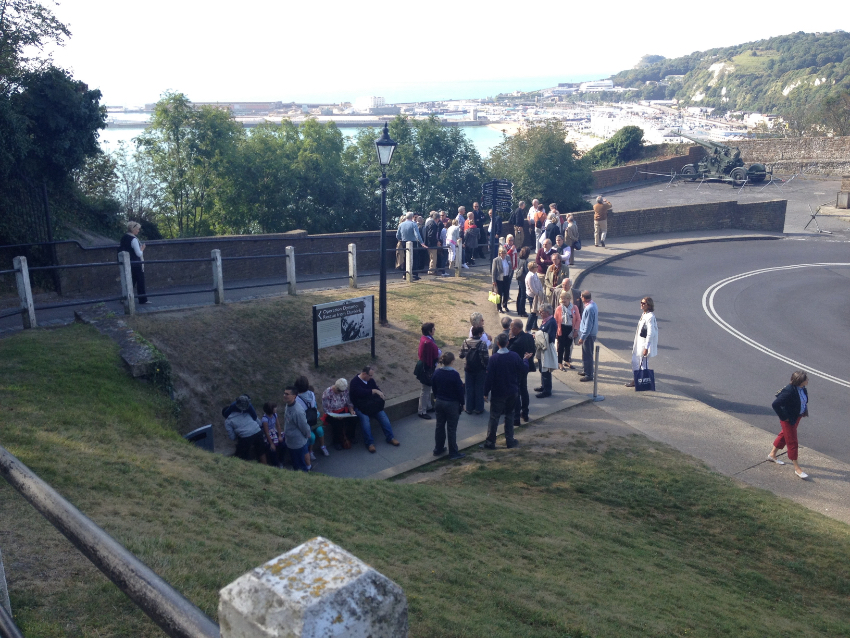 The following year, members of all four Clubs agreed to the proposal, and Rotary International encouraged it. A presentation from Jon Wilson, CEO of the Folkestone Rainbow Centre, suggested the Club focused on alleviating debt, and pairs of Rotarians set out to assess the reaction of local charities and agencies working in the field of deprivation. Without exception, the feedback was encouraging, with strong support for the idea. Sue Day, CEO of Citizens Advice in Folkestone, expressed a willingness to help find a way of making the project happen.

At a workshop in September 2014, supporters of the idea from eight local organizations explored how many different needs reinforced each other to keep some people trapped in the web of unmanageable debt. As Sue Day pointed out, once a client had cleared a particular debt, that was rarely the end of the story. Unless sustainable changes took place, relief would be followed by a slide back into debt. And sustainable changes were likely to involve many kinds of help, each provided by different charities or agencies. Participants developed the idea of a Debt Crisis Hub (DCH), run by one charity on behalf of all.

Dan Keeling, an experienced project manager and member of the Folkestone Rotary Club, took on the project’s management and gradually pieced together a project plan – the first of many maps to guide the project’s tortuous progress. Since funding for a permanent physical DCH was likely to be beyond the reach of the project, the idea of an App was born to integrate the advice of many sources on a client’s smartphone and incorporate best practices from behavioural economics by ‘nudging’ the client to do the right thing.

Each charity or agency involved had its ideas for resolving the resourcing dilemma, so Terry Cooke-Davies, an experienced facilitator and Rotarian, gathered representatives from each for a ‘design thinking’ workshop that produced more than a dozen schematic solutions. Sue Day isolated the elements common to all designs, and the team invited supporters to offer whatever resources they could to make the concept a reality. To their dismay, while continuing to express its support, every organization explained why it could not offer people, money, or premises to help make the idea a reality. 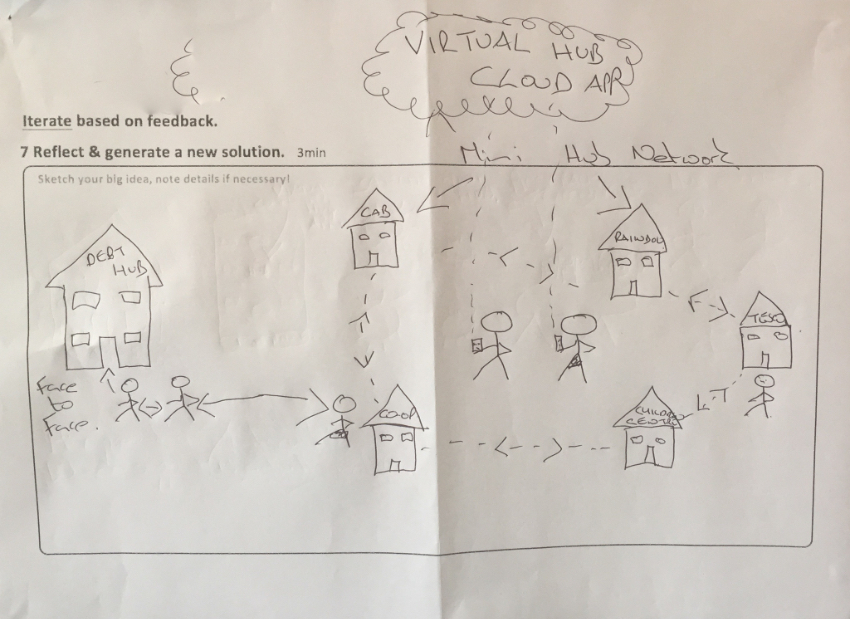 One of the outputs from the design workshop. This sketch encapsulated the eventual shape of the service.

Meanwhile, Folkestone and Hythe District Council prepared a strategy to improve social and economic cohesion in Folkestone4, including a grant of £2.5 million from the European Union. The strategy document, under the heading “Promoting Financial Wellbeing”, states that “local charities have indicated that the number of people and families in need that could be effectively helped to reduce indebtedness could be significantly increased if a “Debt Crisis Hub” (DCH) is established in Folkestone. The DCH would direct families in need to the most appropriate services… The Rotary Club is working to secure funding to establish a “Debt Crisis Hub”, which could be supported through the CLLD Programme.”

The Club held a council of war with Dan, Terry and three Club officers and decided to scrap the idea of a physical space and app. Instead, they favoured one of the other ideas from the design workshop – a ‘virtual’ centre. A volunteer mentor would work alongside a professional money advisor to support the client in gaining the help they needed from whichever charity or agency offered it. The project name was changed from DCH to ‘Helping Hand’, reflecting the changed emphasis. Dan approached the Shepway Volunteer Bureau to develop a training and management programme for the volunteer mentors. From Kent County Council, Ivan Rudd helped the team identify unique aspects of the proposed service. Terry attended a ‘Theory of Change’ seminar so that the team could spell out precisely how each part of the new service would help clients make sustainable changes in their lives. 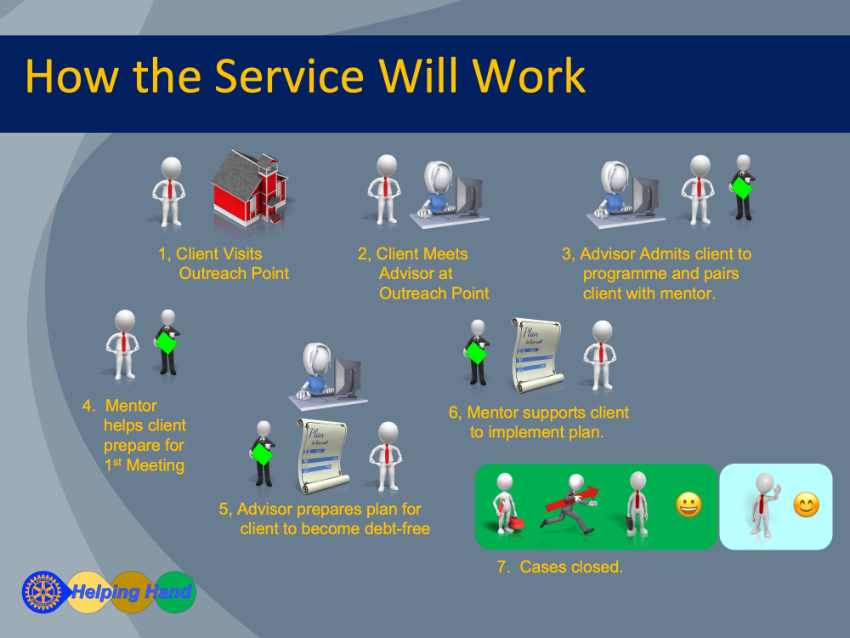 The team now had new maps of both the project and the service it would establish. With support from both District and County Councils, the team launched successful bids for external grants to supplement Rotary’s funds. The Town Council, Kent County Council, Kent Communities Foundation, the People’s Postcode Trust, and the Roger De Haan Charitable Trust all responded with offers. Rotary Past President Dave Roseveare agreed to become Project Director. When the District Council’s EU grant came through (despite Brexit) and offered £50,000 to the project, implementation could finally commence with a kick-off meeting held on 2 October 2018. 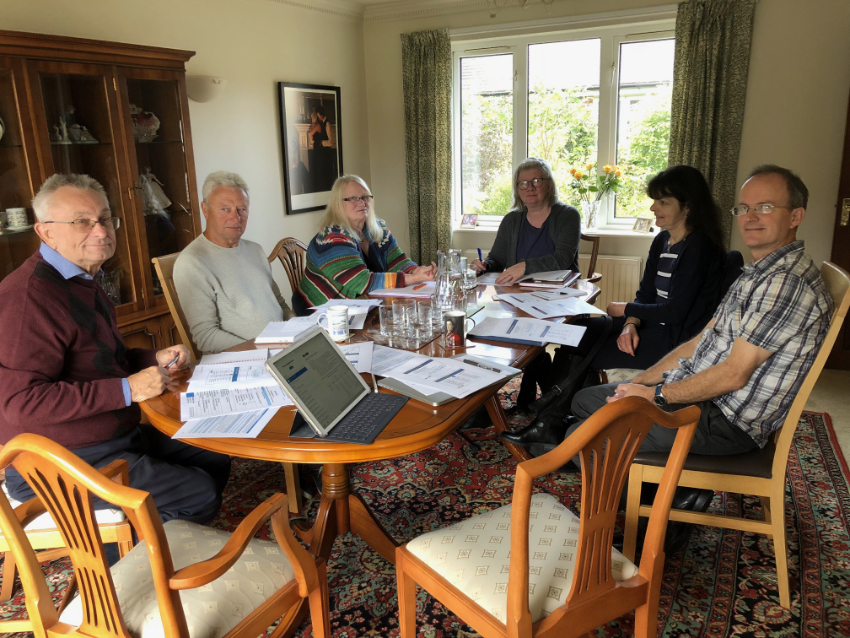 The new service was directed by a three-way partnership between the Folkestone Rotary Club, Citizens Advice (CA), and Kent Coast Volunteering (KCV). Two dedicated part-time employees delivered the service; a money adviser employed by CA and a volunteer coordinator employed by KCV. Drive Marketing was engaged to clarify the messaging and prepare the various documents required to recruit mentors and publicize the service.

They immediately encountered yet another roadblock – the name ‘Helping Hands’ was being used prominently by a local home care agency! A brainstorming session resulted in a further change of name to “Money Matters, Folkestone” (MMF), with the strapline “Supporting you out of debt and into work”. The service opened to clients in June 2019, and in its first twelve months, assisted 19 clients with total debts of £195k debt to alleviate £126k of it. 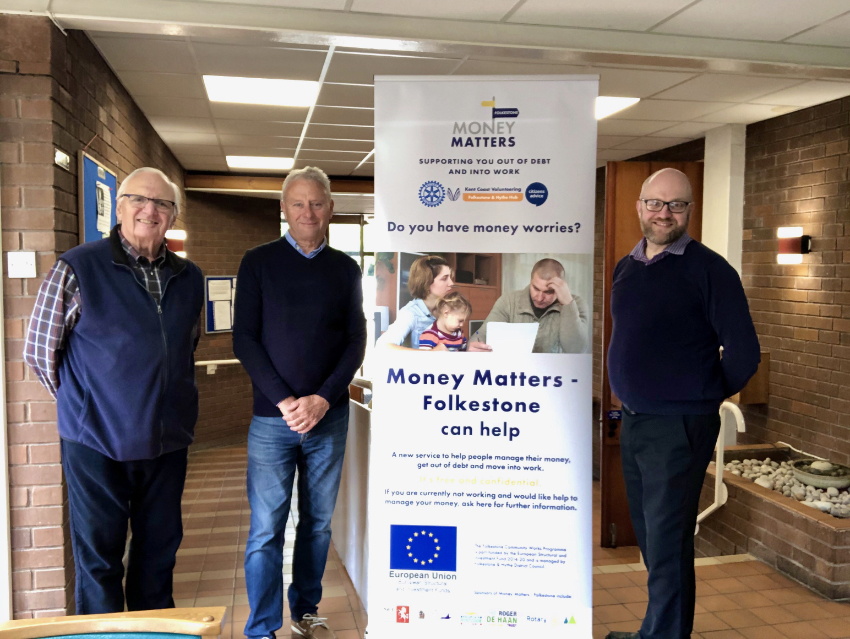 Ironically, the EU grant, which had played such a significant role in facilitating the service’s launch, was never taken up by MMF. The administrative burden associated with preparing and submitting claims proved to be more expensive than the value of the grant. MMF also found that many of its clients were beneficiaries of the local Foodbank. So, when internal changes made it difficult for KCV to continue employing a dedicated volunteer coordinator, it made perfect sense for the Folkestone Rainbow Centre, which operates the Shepway Foodbank, to replace KCV in the partnership, and then take on the leadership in 2021.

By early 2022, less than three years after admitting the first client to the service, professionally prepared money advice plans (or MAPs) and support from trained volunteers are being provided each year to fifty of those in need of help and advice. And now, with stability and sustainability achieved, the Rotary Club has also withdrawn from the partnership. But not before discovering its map of how to help charities work together to tackle the challenge of unmanageable household debt. 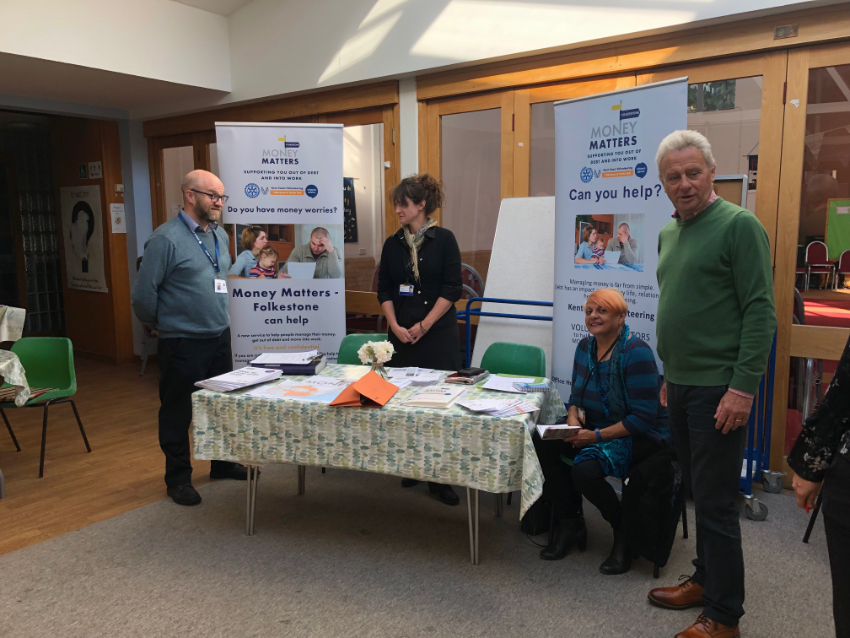